A commission by the University of Cumbria to work with second year bahpa performing arts students. A work exploring the criminal mind and psychology. (Due to the disastrous flooding in Carlisle December 2015 performances of the search were canceled)
Looking Outside from the Inside (September 2015)

Commissioned by Dance City for Edits, worked with a cast of both local community members and professionals. The work centred around a greenhouse designed by local artist Jamie Tullie and commented on social trends, conventions, society and the individual. Extracts from this work was a also presented at The House of Blah Blah performed by Alicia Meehan for Fresh North East in October 2015. The work was developed in collaboration with Dance Ahead in August 2016 to create The Glass House.
​

"Living History a cross generation performance project with a cast of professionals and community dancers. Adam Russell made an open call to Carlisle residents interested in trying their hand at contemporary dance. For six weeks Tullie House's Galleries were transformed into a dance studio, with rehearsals for three groups of amateur and professional dancers ranging from the age of 7 to 79." J. Goodfellow
'A new way of interpreting cumbrian history... meet extraordinary people doing extraordinary things.' R. Lytolis (Cumberland News)

"The project concluded in promenade dance performances at Tullie House Museum and Art Gallery in Carlisle, which began by the notorious ‘cursing stone’ in the museum underpass, moving through the galleries with scenes in the Victorian train carriages, on the roman wall, by the iron age hut, through old tullie house, and outside into the Jacobean gardens. The dancers told a compelling story inspired by the space and the time period it represented." J. Goodfellow

The project was supported by Arts Council England, The Hadfield Trust, The Co-operative Membership Fund alongside fundraising and support from local businesses. 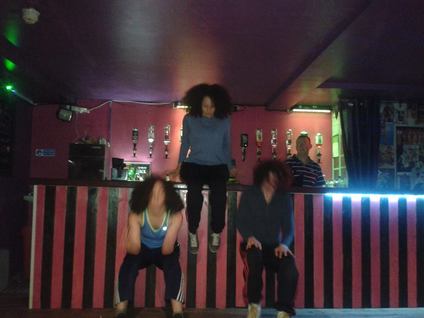 A Boring Day at Work is a collaboration in choreography and performance by Adam Russell and Andrea Charter Lund premiering at The Regency Nightclub in Carlisle. A work that that takes the edge off all things serious. From a room filled with an extensive amount of newpapers to the insights of workers day dreams and imaginations.

A commission by the University of Cumbria working with joint honours second year dance students. The work explores the idea of beauty. The influence of media has on society and how it can distort the true essence of beauty.

'From what seems to be the setup of a 1940s narrative documentary about the life of antique warriors who identified themselves with unknown legendary birds of equatorial regions, here Adam stands; he interprets a body, a moving back immersed in a non-face land. His movement sticks to your imagination like little gluey pictures with golden frames, displaying contorted contortions mediated by incredibly still yoga vinyasa positions. Routines of exhausting circular head motions follow, as if the whole dance is more than a religious procedure, as if it was quoting social liberation movements from the future whilst recalling the never ending ever lasting 80s. Completely devoted to clarity within the weirdness if its design, the performance fills the space and time of the representation. Nothing really flows, and it’s for the best, no water, but instead earth, sand sculptures, and trees; each scene needs your total attention and care in order to really make the most out of its fruition.' M. Elliot
Credits
Choreography and Performance: Adam Russell
Costume: Casey Dixon

Extracts from this work was a also presented at The House of Blah Blah performed by Alicia Meehan for Fresh North East in October 2015.
Chapter 18 (March 2013)

The work was a self portrait exploring events that happened during Adams Life. The work was a mixed media installation and also used video, projection and set. The work was performed at the Riley Theatre and in the Lighting studio at Northern School of Contemporary Dance in 2013.

Extracts from this work was a also presented at The House of Blah Blah performed by Alicia Meehan for Fresh North East in October 2015.